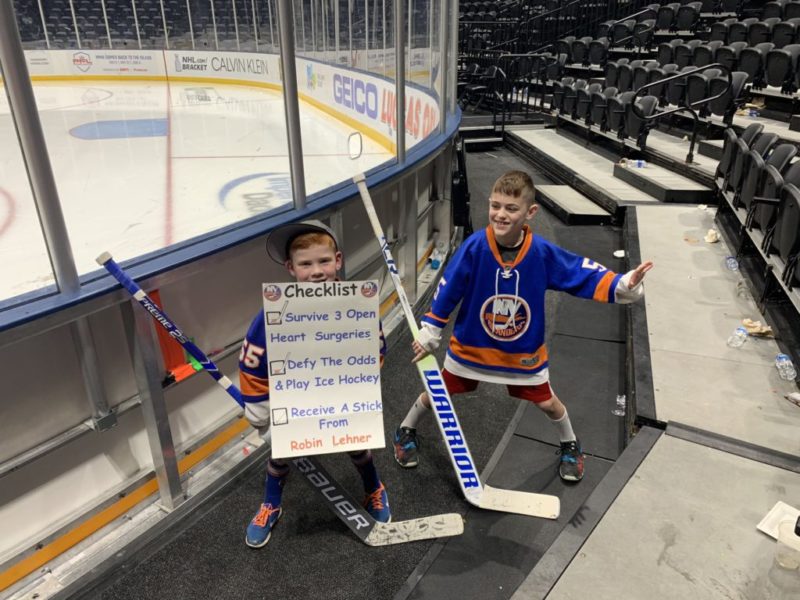 As I wrote on my blog, Islesblogger this week – Jack Foley, AKA Super Jack got the chance to meet his idol Robin Lehner. If you haven’t seen the post please give it a quick read. I also got to spend a good chunk of the game on Monday night with Jack and his family too. It’s a night I won’t ever forget.

Here’s the Tweet heard round the world, the one that caused everything to happen the way it did. It currently has almost 4,000 retweets and over 14,000 likes!

Episode 30 is a little different and a departure from the normal content you’ll find here. We talk about some of the health issues Jack has been through in his young life and some other topics that will make people listen with a tilted head. I’ve been drawn to Jack and his family since I first heard his story.

As you can see from the sign, Jack has experienced a host of medical problems during his young life. He’s had THREE open heart surgeries to help with being born with HALF A HEART! He’s beat every single set of odds and blown through all the expectations Doctors had set for him. He is truly an amazing young man – and I am happy to call him a friend now.

It’s about Fate, too.

In my post on Islesblogger, I talk about Fate.

I really feel like fate has brought us together – we go into that in the podcast. You may not believe in fate, and that’s ok.

Prior to recording, Super Jack made his Mom and I wait while he finished up a game of NHL19. His Mom told me afterwards that he played with Islanders great Pat LaFontaine – because of his work with the Companions in Courage Foundation (CiC). I happen to be a big Patty La fan (and a gamer) so he got a pass.

Jack and I talked about the reasons why he picked Robin Lehner and about this huge hug from the big man:

He talks like someone much older than he is – and probably understand why at this point. He did tell me though that his likes Robin because he’s gone through a lot in his hockey career, like he has gone through in his short life. It’s a remarkable story the way things turned out.

Jack not only got a stick from Robin, he got one from Thomas Greiss as well. He met a large group of players – Jack proudly listed them off as Scott Mayfield, Johnny Boychuk, Josh Bailey, Mat Barzal, and Anthony Beauvillier. He was really treated like royalty, His Mom, Lauren even told me that Boychuk remembered him from a previous meeting and seemed more excited to see HIM than Jack was to see the player.

Lauren also told me that Jack will be attending the Matt Martin Hockey Camp this summer, so that’s something else exciting for him to experience in the coming months. We made plans to hit the ice together as well – something I know I am really looking forward to.

I asked Jack if his new fame was causing him extra attention at school. He said everyone was asking him questions and wanted him to give them shoutouts when he was on Channel 7 News on Tuesday night. He didn’t get the chance to give shoutouts, but we made sure he gave plenty during the podcast.

We also talked about the Islanders season and the stretch run to the playoffs and who he thinks the Islanders will face and what he thinks they can do. It’s a great little interview and I told him he can come back as my co-host whenever he wants.

The goal for Jack, his real dream – is to become a New York Islander for a day. It’s something that I know I won’t stop pushing for either. Jack may not be able to play hockey forever, he may eventually even need a heart transplant. But for now, he enjoys playing as much as he loves watching his favorite team.

We’ll be back with another two episodes where we talk Islanders hockey over the next two days. Tonight Roger Luce the long time arena announcer for the Islanders (and WBAB Morning Show Radio Host) comes on to talk about some hockey and on Saturday Mark Parrish makes his return as well. We’re finishing the season on a frantic pace as we head into the playoffs.

There’s a Charity Walk for Super Jack on May 19th – if you’re interesting in walking or donating to the cause – please head over to their team page and donate what you can! It helps out kids all over the country just like Jack!